AI - the trend of the future?!

Artificial intelligence is a key driver of digitalization - also in the gastronomy industry. Through the targeted use of AI-supported tools, the degree of automation in the company can be established or even increased, which pushes efficiency and lowers costs.

Artificial intelligence - a big buzzword, which leads in many places to uncertainty and lack of understanding. Nevertheless, the opportunities and potentials associated with the use of artificial intelligence, should be seized. Due to the enormous progress of digitalization, robotics and finally artificial intelligence, especially for restaurateurs, there are new offers which allow businesses to be prepared as best as possible for challenges and crises. It remains to be seen how concretely the human-machine symbiosis, especially regarding time-consuming processes such as washing up, clearing or serving food, can be integrated into the people-business gastronomy.

One thing is clear: digitalization lives from future-oriented thinking, and AI is an integral part of it! Exciting ideas, developments and visions from the digital makers - INTERNORGA 2022 gives digitalization the space it deserves. 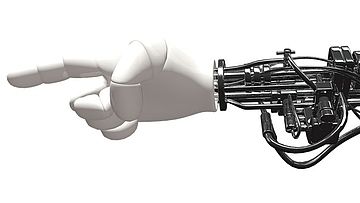