The pandemic has shaken up the travel industry, and with it, the traffic gastronomy. What is the current situation and which trends are emerging?

A soft drink, sandwich, or salad to take on the plane - that's everyday life in times when airlines are cutting back on in-flight catering. However, the pandemic has severely limited food courts at airports. But as travel traffic increases, the segment is slowly recovering.

Social developments can also be seen at motorway service stations. People prefer to drive for fear of infection. Breaks to recover or refuel are part of the journey and are a wonderful change on the journey.

Gastronomic offers at rest stops will benefit from the boom. Because it is the guests who want to access a high-quality gastronomic offer while their car is charging. In addition to the classic bakery portfolio, gastronomy concepts have established themselves, including many well-known system gastronomic businesses with a large range of food. Service areas become local suppliers and offer numerous additional offers.

And which food trends are en vogue in the traffic catering industry? From coffee-to-go, to a healthy lunch, to a sandwich to go in the evening. Simple, fast and, best of all, healthy - that's the motto.
If your stomach is growling again at the airport or when changing trains at the train station, the range and quality have evolved significantly: fresh and tasty sandwiches, focaccia, wraps, sushi and salads are available to choose from, as well as premium burgers and pizza.

At the same time, it is becoming apparent in system catering that companies are increasingly merging. The brand mix of the new gastronomy units in the food court is adapted to the special requirements of airports and train stations. For example, the industry leader SSP, in close partnership with Deutsche Bahn, has successfully opened the first half of the new catering outlets in the C-Passage market hall at Cologne Central Station. Deutsche Bahn, the franchise partners Wiener Feinbäckerei Heberer, L'Osteria Piccola, Nordsee and SSP celebrated the four store openings with a grand opening event.

And it is becoming clear that  young companies are increasingly entering the industry. The Berlin start-up Haferkater has pushed ahead with its expansion at Berlin's Ostkreuz. The French fries manufacturer Frittenwerk is also expanding and, with several franchise locations, is almost old news. 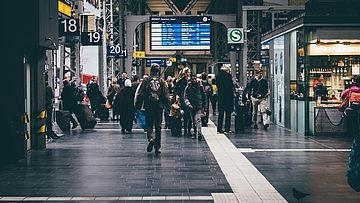